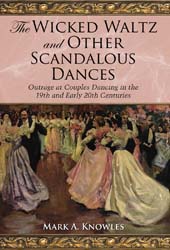 The waltz, perhaps the most beloved social dance of the 19th and early 20th centuries, once provoked outrage from religious leaders and other self-appointed arbiters of social morality. Decrying the corrupting influence of social dancing, they failed to suppress the popularity of the waltz or other dance crazes of the period, including the Charleston, the tango, and “animal dances” such as the Turkey Trot, Grizzly Bear, and Bunny Hug. This book investigates the development of these popular dances, considering in particular how their very existence as “taboo” cultural fads ultimately provided a catalyst for lasting social reform. In addition to examining the impact of the waltz and other scandalous dances on fashion, music, leisure, and social reform, the text describes the opposition to dance and the proliferation of literature on both sides.

“…a glittering gem. Would that I had this rich, beautifully organized and staggeringly indexed, footnoted work when I was teaching! …the smooth, saucy, highly readable style keeps the reader moving along… and the pictures are priceless.” – Cheryl Cutler, founder of the Wesleyan University dance dept. & author of Creative Listening: Overcoming Fear in Life and Work., February 2010.

This illustration found in Jas. H. Brookes’ anti-dance treatise The Modern Dance (189-?) suggests that yielding to the temptation of dancing can lead to other transgressions such as drinking, gambling, and attending the theatre.

A 1912 postcard comically representing one of the most popular animal dances of the day. The title of the series is from Irving Berlin’s ragtime anthem “Everybody’s Doing it Now.”

Dance hall sign from the first decade of the twentieth century forbidding the dancing of “freak dances.”

From a series of 1914 Russian tango postcards.

A postcard from the first decade of the 20th Century expounding the necessity of knowing how to do the latest modern dances.

Newspaper photograph of the disaster at the Pickwick Club in Boston on July 4, 1925. It was believed that the frantic beating of the feet of the Charleston dancers inside were responsible for the collapse. Afterwards, the Charleston became know as “The Dance of Death.”